Scenes from the screening area

Jesse Ventura is (still) upset that he was patted down while going through airport security, but his lawsuit has been tossed out and now he says he’ll never stand for the National Anthem again.

He’s going to go back to Mexico, and seek dual citizenship. He’s not about displays of patriotism anymore, apparently.

Who wants to be the one to tell him there’s still an official portrait up at the Minnesota Capitol that is a bit of a flag-waver? 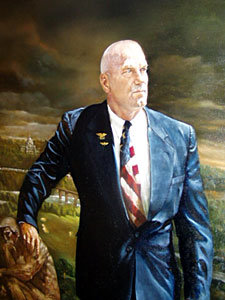 Which brings us to Friday, the day the Transportation Security Administration releases its list of lame attempts to smuggle stuff through security.

A passenger at Santa Barbara (SBA) alarmed the walk through metal detector and an anomaly was detected in her groin area during a pat-down. The passenger eventually admitted she had a tube of toothpaste concealed in her groin area. While we’re not looking for toothpaste, it was concealed in an area where explosives can be hidden and we had no idea what it was until we resolved the alarm. We should have known what it was though, right? Isn’t that where all the cool kids are keeping their toothpaste nowadays?

That’s just the kind of person who could be elected governor somewhere.