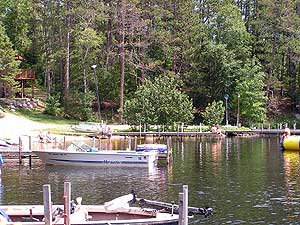 Is the time still right for Minnesota to be buying land for a new state park?

Gov. Tim Pawlenty today said the window is closing for one of his pet projects — a new state park around Lake Vermilion in northeastern Minnesota. The land is owned by U.S. Steel, which wants more money and thinks it can get it from developers anxious to build luxury homes.

That’s business. Housing. Jobs. All the things that Gov. Pawlenty has been saying for 6 1/2 years should trump just about everything else in the state. But he says the plan could help save small campgrounds in the region. Back in 2005, however, some of those campgrounds said the problem is state regulations around the lake.

The Legislature appropriated $20 million to buy up the land during the 2008 session.

Who’s the biggest landowner in St. Louis County now? The state of Minnesota.

“Our only request back to the DNR, which is a very reasonable request, is that they would sell other properties within St. Louis County,” county commissioner Keith Nelson told MPR’s Stephanie Hemphill back in 2007. “Waterfront properties that they hold presently, that would be of equal value to this new proposed park.”

Of course, times were better back when Pawlenty came up with his idea. The economy hadn’t yet tanked, and social services to people — many of whom had no chance of using the new state park — weren’t yet being unalloted.

Should the state continue plans to buy land for a new state park around Lake Vermilion?(polls)