1) Bar none, the most compelling story of the last day or so was colleague Stephen Smith’s time travel back to the end of World War II, when returning soldiers and their wives bunked with relatives, when only the well-off got loans for mortgages, when debt wasn’t the enemy.

2) So you don’t like not being able to buy a beer at the new University of Minnesota football stadium? Let’s wing down the Big 10 Highway and see what constitutes controversy at the University of Illinois. Special treatment for kids with clout, a Chicago Tribune investigation shows:

The commission was convened by Gov. Pat Quinn in the wake of a Chicago Tribune investigation that revealed more than 800 undergraduate applicants and dozens of graduate students within the last five years had been flagged for special treatment. Some substandard students — pushed by legislators, university trustees or other politically connected people — were admitted against the wishes of admissions officials and deans, the newspaper reported after examining thousands of pages of public documents, including campus e-mail.

3) An effective environmental-protection tool or the assumption of good marketing to suckers? Renting things is the new goat cheese.

It almost seems anti-American to rent, rather than buy; a look at the popular reality TV show “Clean House” is a testament to Americans’ love of accumulating stuff. In this global recession, people are warming to the idea of renting, and not buying, certain goods – because of cost, ease, or space considerations.

4) The Supreme Court is rolling back legal precedents established during the Warren Burger era, according to Tom Goldstein at SCOTUS Blog, and there’s nothing President Obama can do about it:

It isn’t until the election of 2016 at the earliest that there is a real prospect for a significant shift to the left in the Court’s ideology. Actuarially, that election is likely to decide which President appoints the successors to Justices Scalia and Kennedy (both on the right, and both 73 now) and Justice Breyer (on the left, and 70 now). Absent an unfortunate turn of health, between now and the summer of 2017 there is no realistic prospect that the Court will turn back to the left. Over the course of that eight years, it is possible to take enough measured steps to the right to walk a marathon. Again, no need to rush.

Two-timing politicians, take note: cheating has never been easier. AshleyMadison.com, a personals site designed to facilitate extramarital affairs, now boasts slick iPhone and Blackberry versions that help married horndogs find like-minded cheaters within minutes. The new tools are aimed at tech-savvy adulterers wary of leaving tracks on work or home computers. Because the apps are loaded up from phones’ browsers, they leave no electronic trail that suspicious spouses can trace.

Flashback to November 2008: Rich Cut Back on Payments to Mistresses (Wall St. Journal)

What’s wrong with us?

Bonus: Maybe it’s not so bad, though. Take these bike cops in Minneapolis, for example. Yesterday they were riding around and found a gym full of kids, according to their blog. So they read a book to them. The kids sang them a song. And I stole a picture from their blog: 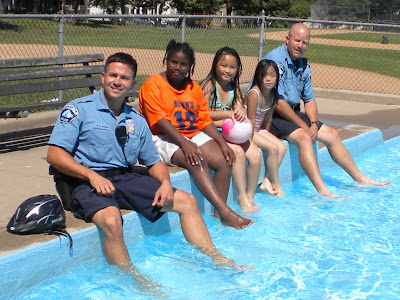 Question of the Day

How do you decide whom to trust with your money?

To submit your answer and hear it on the radio, go here.

Midmorning (9-11 a.m.) – First hour: How much will a public health plan cost? Second hour: Edmund Andrews reported on the downturn in the economy, writing articles on the go-go mortgage market before anyone thought it would collapse. Like millions of Americans, Andrews found himself weighed down by a home loan he couldn’t afford. Unlike the others, he wrote a searing account of his own mortgage crisis.

Here’s the entire article that appeared in the NY Times Magazine in May.

It’s been open season on the guy since. Megan McArdle at The Atlantic, however, wrote that the story has been “tidied up,” and that the fact his wife filed for bankruptcy — twice — didn’t make the essay. We’ll see if this comes up today.

Midday (11 a.m. – 1 p.m.) – — An update on the situation in Iraq. The guest is Stephen Van Evera of MIT. Second hour: From the Aspen Ideas Festival this week, several speakers with short presentations on their “Big Idea.” Here’s an idea for the people at AIF: Make the video on your Web site embeddable. And Quicktime? Put it in a more user-friendly format. By the way, you can follow the festival on Twitter.

Talk of the Nation (1-3 p.m.) – Nearly a million Iranians live in the United States, more than any country outside of Iran. Many fled the Islamic revolution 30 years ago, and now watch warily as government forces crackdown violently in Tehran. How are they viewing the current crisis?

All Things Considered (3-6:30 p.m.) – Dan Olson reports on urban gardeners who are in it for the profit. Also: Why is there so little Arabic content on the Internet? A body farm in Texas that’s used to teach forensics. Older doctors provide their perspective on health care; the younger docs get their shot on tomorrow’s show.