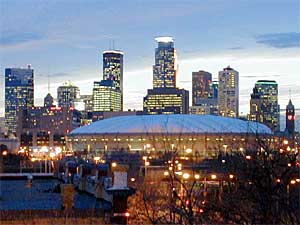 Over the years, Minneapolitans have gotten accustomed to being at the top of various — and usually, trivial — surveys with questionable methodologies. Gird yourself! We’re at the bottom of a survey of popular places to live.

First the bad methodology part: The Pew Center called people up and asked them whether they’d like to live in particular cities. If you’ve never been to Minneapolis and someone called you at the edge of winter and asked you if Minneapolis turns your crank, would it?

Now the results: Nearly half of the people surveyed said they’d rather live somewhere else. Denver, San Diego, and Seattle were top ranked.

Only Detroit, Cleveland, Kansas City, and Cincinnati were rated worse than Minneapolis. Only 16 percent of those surveyed said they’d like to live here. Most of those who want to live here are young people, make between $30,000 and $50,000, have some college or are college grads, are evenly split by political party, and are more liberal.