You are the editor It’s a slow period in the news business, so it seems to me that selecting the top story of the day is easy — and it’s not about shopping, a story that is done every year, the same way, on the same day, and never has any real substance to it. It’s Mumbai. But then again, I’m old school.

So let’s play “you are editor.” You’re the person who decides what story will be at the top of the newspaper, or lead-off the nightly TV newscast, or be at the top of your organization’s Web page.

Last night, as Indian commandos stormed Nariman House in Mumbai (where, unfortunately, the five hostages were killed), KSTP led its 10 p.m. newscast with a shocker — get it? — about the state High School League pushing for AEDs in school, CNN featured Larry King talking to some Hollywood bimbo, and Nightline presented a piece on mental illness among veterans, which — while important — has been done many times. If you wanted to follow the story on TV, you were out of luck; it wasn’t being covered on any national or local channels.

This morning, a check of the major news Web sites in the Twin Cities (about 10 of them) shows that only one — the Pioneer Press — considered the Mumbai story the top story. It’s a particularly puzzling situation when you consider that the assault happened after people went to bed.

True, the Mumbai story lacks the “elusive Minnesota connection” that we newsies here seem to insist is necessary for Minnesotans to grasp the complexities of a story, but doesn’t this story transcend that? And are we really that insular or do news bosses just think we are?

You decide. You’re in charge. In what order would you present the day’s news, keeping in mind you want people to pay attention to what you have to say? (And be sure to give a reason, you know how your reporters can be!)

By the way, if you’re not really into the long lines at Victoria’s Secret or Best Buy, you might be interested in following this excellent blog from Mumbai.

Update 10:49 a.m. – I wonder if part of the “problem” (if you consider what’s been described as a problem) is an outdated portrait of what a “Minnesotan” is. This image from a story MPR’s Mike Edgerly a few years ago is intriguing: 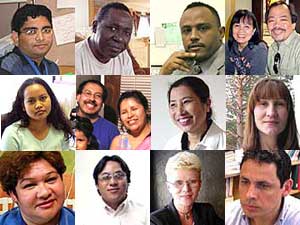 They’re all Minnesotans, too. Are their news needs being satisfied? Are they different?

11:11 a.m. a.m. Here’s how one area news crew made its decision. This is a screen grab of a Web page at a TV station in Boston, which was once considered the best local TV station in America. Not only is the top story about a murdered blonde, white TV anchor (Update 6:47 p.m. Just so we’re clear here. News is a tough business so my questioning the value of the anchorwoman story is not meant to diminish the value of her life. However, as editor,you do have to explain why her life is more newsworthy than the nearly 200 who died in Mumbai, or even –in this case — the two people who were killed on Boston’s streets on Thanksgiving that weren’t considered newsworthy.) but the Mumbai story isn’t listed anywhere on the page. It comes up in rotation with 5 other stories — holiday shopping, someone hit by an Amtrak train, and what kids are thankful for). The Mumbai story is last in rotation. You’d have to watch the screen for 21 seconds (a lifetime for Web pages) before Mumbai appears. So that’s how they ranked their story choices, fyi.

The page is put together by the Mendota Heights-based Internet Broadcasting System. The Birmingham paper thought it was neither the top, nor second story, but third, about on a par with “Bama fever,” which now that I think of it, is a world threat. The problem in Anchorage, perhaps, is they can’t see India from their backyards. In San Francisco, it turns out cable cars are old technology. Who knew? The Denver Post, an area with neither cable cars nor “Bama fever.” The other paper in town, the Rocky Mountain News (owned by the same person who owns the Pioneer Press) also had just the India story on page one. A lot of people in journalism like to suggest DeanSingleton , the owner, is a threat to the future of journalism. Not today.

In St. Cloud, the big story is the auto dealers are surviving. PS: The hostages died. What does St. Cloud know, that Lincoln, Nebraska doesn’t?

Update 2:58 p.m. – For some really compelling pictures, check out the Boston Globe. Some are very graphic, however. (h/t: Peter Berge via Twitter)